Deputy Permanent Representative of Mexico to the United Nations. 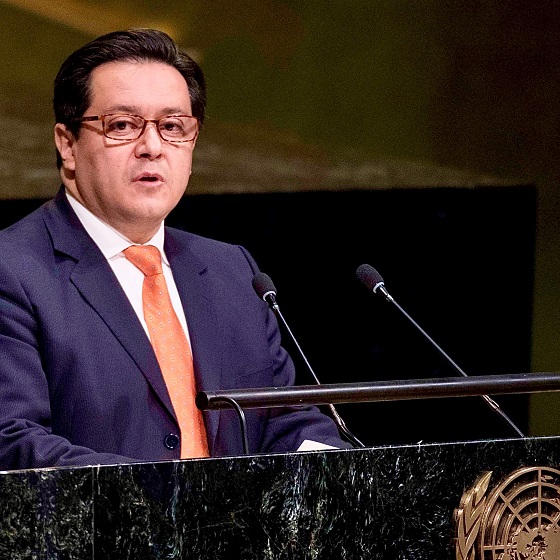 Ambassador Juan Sandoval-Mendiolea is a career diplomat. He joined the Mexican Foreign Service in 1992, and was promoted to the rank of Ambassador in 2014. Since 2015 he is the Deputy Permanent Representative of Mexico to the United Nations in New York.

He holds a Law degree from Escuela Libre de Derecho, Mexico City (1984-1989), the Diplomatic Academy Program by the Matias Romero Institute (1992-1993) and has undertaken postgraduate courses in France, Switzerland, The Netherlands and Brazil.

In the Ministry of Foreign Relations, he was Director-General for United Nations Affairs (2013-2015), Director of Cabinet of the Undersecretary for Multilateral Affairs and Human Rights (2007-2013) and Assistant Director General for Inter-American Organizations and Mechanisms (2006-2007).

He was posted as Deputy Representative of Mexico to the Organization of American States (OAS) in Washington D.C. (2001-2006). He was the Mexican expert to the Multilateral Evaluation Mechanism on narcotic drugs (MEM), and in the Follow-up Mechanism of the Inter-American Convention against Corruption (MESICIC). He was Chairman of the Special Committee on Transnational Organized Crime of the OAS.

He was posted as Legal and Human Rights Affairs Counselor to the Mexican Embassy in France (1994-2001). He has been representative of Mexico in numerous meetings of the United Nations, OECD, UNESCO, and the Council of Europe.

He led the negotiations for the admission of Mexico to the international export control regimes (2011-2013) (Wassenaar Arrangement, Australia Group and Nuclear Suppliers Group). Likewise, he had one of the leading roles in the National Interagency Task Team for the returning of Mexico as troop contributor to the UN Peace Keeping Operations (2013-2015).

He co-chaired with Japan the 3rd United Nations Science, Technology and Innovation Forum (STI Forum). He is President of the Working Group on Amendments of the Rome Statute of the International Criminal Court and he also chairs the Group of Friends on Voluntary National Reports and on the Follow-up of Agenda 2030. He was elected Vice-President of ECOSOC 2019-2020 and presided over the Operational Activities for development Segment..

In the academic field he has been lecturer at the Ibero-American University and the Escuela Libre de Derecho in Mexico City. He has given numerous conferences in institutions as: Toulouse University, the Superior School of War, Center for Superior Naval Studies, UNAM, Olmeca University, Colegio de México, Instituto Matias Romero, Georgetown University, University of Southern California, among others. He is member of the Mexican Council on Foreign Relations (COMEXI).

He has been decorated by Spain with the Order of Isabella the Catholic.

He is fluent in Spanish, English, French, Portuguese and Italian. Ambassador Sandoval is married and father of two children.